Move over jeans, Trousers are in 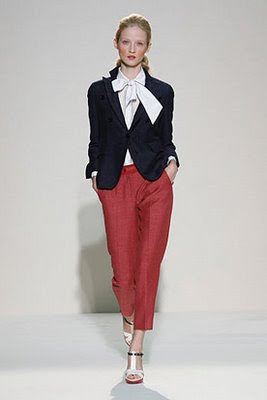 FASHION - Jeans will always be cool, of that there is no doubt. But its starting to look like they will have a lot of competition from the growing trend of wearing trousers.

You would think that jeans, perhaps the most proletarian piece of apparel, known for durability, strength and versatility, would soar during recession times, but instead blue jeans appear to have fallen out of favour with women (sales are down world wide over the past 8 months). Denim is practically a demi-god in the fashion world, but in this David and Goliath story it seems like the lowly trousers now has the advantage. 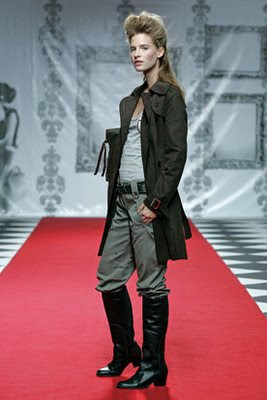 Conclusion? Blue jeans aren't that kewl any more. The hip thing these days is the more counter-culture look of trousers, sometimes made of leather or my personal favourite, army camouflage.

In the world of jeans sales for three of the sector's publicly traded players – True Religion, 7 For All Mankind and Joe's Jeans – have declined in department stores. The market is over-saturated with too many jeans brands (and ridiculous prices) and everybody (and I hate to sound like a fashion snob, but everybody includes the ugly people) is wearing jeans now.

They've also run out of gimmicks too. Shredded them, rhinestones, sequins, tread marks, coutured leggings, acid washes, crystals encrusted in them... its been so over done. And its become two other things: Blue jeans aren't worn by rebels any more, they are worn by rich people and by squares. 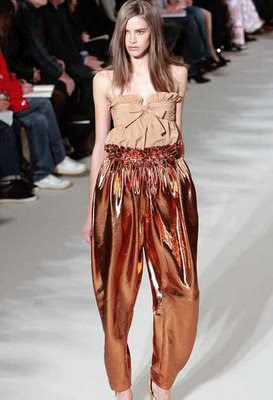 Such an '80s term I admit, but that is the situation we're in. To borrow a Canadian term, jeans are for hosers.

So the laws of fashion dictate that its time for change. And if jeans are out, a different sort of pants must step up.

Trousers come in a variety of shapes: Drop-crotch, dhoti, high-waisted, full-leg, peg-leg, multi-pleated, harem – all different styles and all taking great strides to topple jeans in the popularity contest. The unusual shape of trousers is another part of the new rebel look. It may look slouchy or slovenly, but they're also comfortable and compliment your legs by making them look thinner in comparison. They're more flattering than pants that cling and betray your faults.

The soft, comfy fabric is what wearers seem to love about the new-look trousers, especially the slouchy jodhpur-style pants. Quite a few are made from Lycra or rayon, giving them a bit of the '80s glam-rocker look.

FASHION - I've been doing some research and I think the hot new look for Summer 2009 is cycling chic.

And I've got the photos to prove it. 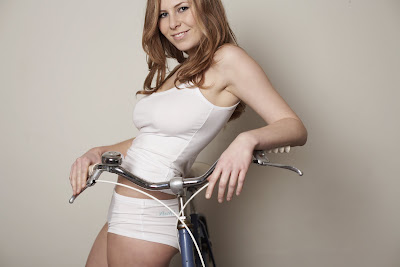 If you Google "cycling fashion" you will find a tonne of websites selling fashion for cyclists, both professional and amateurs. What I prefer however is clothes that is multi-functional, great for doing-whatever, but close fitting enough that you can ride your bike without hassle. 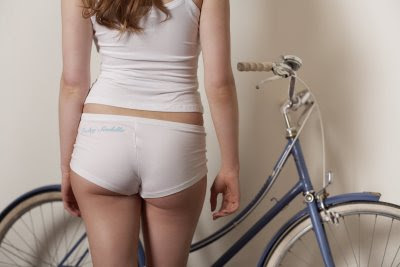 Note the text on the buttocks: Lucky Saddle. (Saddle is another word for bicycle seat for those out there not familiar with bike lingo.) 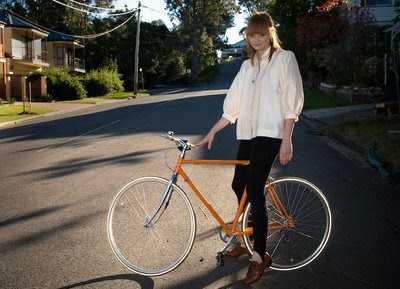 You may be tempted to go for the tight fitting clothing, which looks hot. 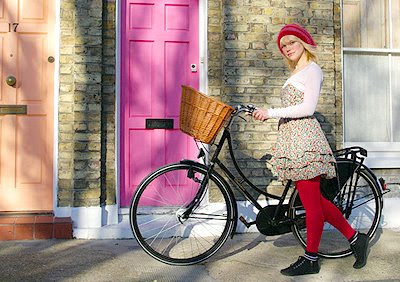 Or even a short skirt, which is cool too, but you will have to be careful about the length and how you sit to make sure it doesn't get tangled up. 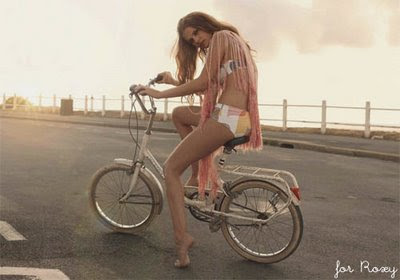 A lot of girls, especially if its really hot out, prefer to shed some layers and maybe even opt for a tank top or bikini. 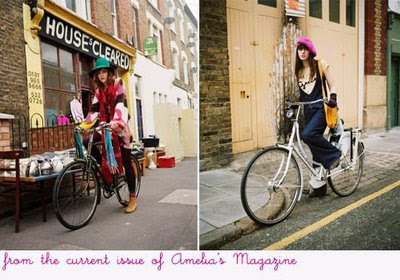 On cooler days you will want to maybe accessorize or wear something warmer because the breeze when biking can be chilly. 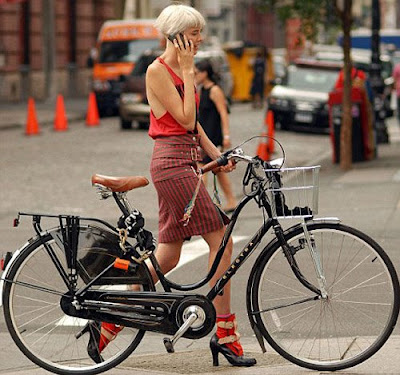 Think of your bike as an accessory. You don't want to ride any rusty piece of wheels. Think retro and fully restored, that or opt for something new and snazzy. 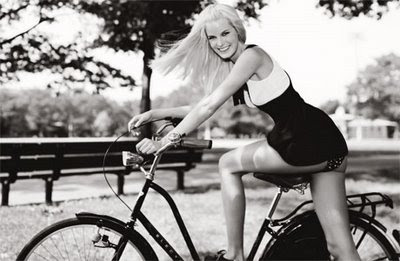 Depending on what you wear you start to realize how chic and hip you look. Definitely a way to attract hot guys who are also into cycling. 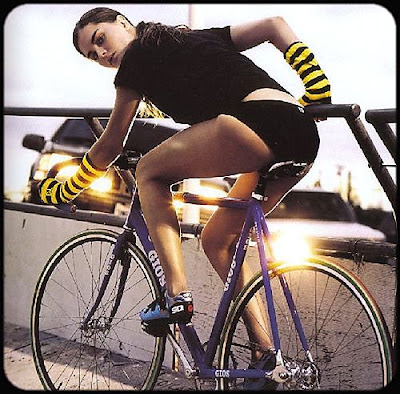 Don't be afraid to make your own riding uniform if you're planning to ride daily. Something that will allow you to shed or add layers depending on the weather, and won't show off your sweat (although some guys tell me there's nothing hotter than a woman dripping with sweat and smelling of pheromones). 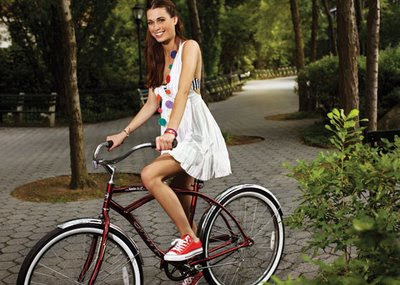 If you get a summer dress just the right length you don't even have to worry about it getting caught or tangled up. 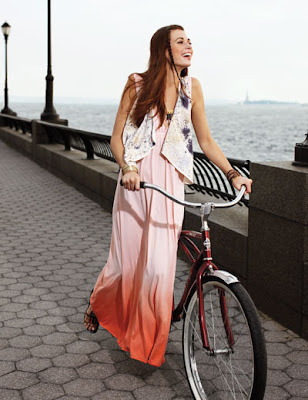 If you opt for something a lot longer, make sure its something you could hike up around your waist more or is more smooth flowing so it doesn't interfere with your ability to pedal. 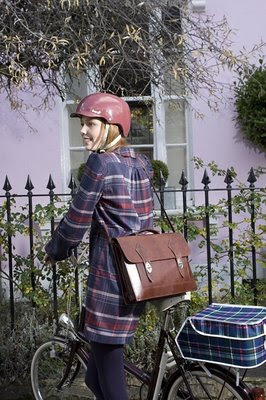 Depending on where you are going (busy streets) you may want to get a helmet. You may feel a bit dorky so look for a helmet you feel makes you look hot, and while you're at it find a backpack or satchel so you can carry things easily. That or buy a bike with a basket.

After all, how fashionable will you be if your bicycle is a wreck and/or you end up in a crash and drooling out the side of your mouth all the time?
Posted by jamie
Email ThisBlogThis!Share to TwitterShare to FacebookShare to Pinterest
Newer Posts Older Posts Home
Subscribe to: Posts (Atom)